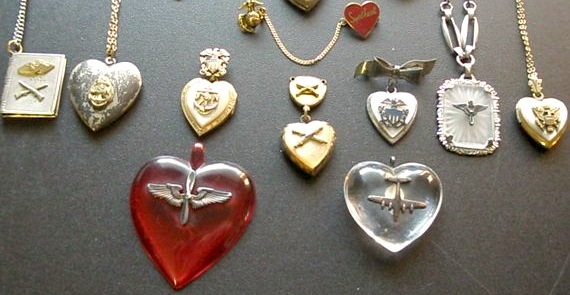 Sweetheart jewelry first became popular during World War I, as a means of connection between wives, mothers and sweethearts back home and the men fighting overseas. It was one of many things that soldiers either made or purchased. But while the practice began back then, the concept really took off during the Second World War.

Why was this type of jewelry so popular? It was fashionable: rationing of material resulted in clothing with little embellishment. Pinning a brooch on a lapel or wearing a locket gave the wearer a little bit of glitz. It was patriotic: many of the pieces were produced in the shape of patriotic symbols; the flag and the American eagle were most often depicted. The slogan “Remember Pearl Harbor” found its way onto many pins, often accented with a pearl. It reflected a sense of service: many women proudly wore the pin version of a “man-in-service” flag, the blue star in the center, on a white background, with a red border, to indicate a son or husband in service.

Jan Krulick will discuss this phenomenon that most people have never heard of, giving us a sense of what it was like during World War II having a husband, father, or sweetheart fighting in a terrible war and trying to stay close to them.

This is the third of 3 sessions that you can register for individually.  When you register, you can choose which you prefer: in-person or Zoom.

Thank you for visiting!
Please take a minute to SUBSCRIBE to our monthly NEWSLETTER
Give it a try, you can unsubscribe anytime.
Close
Go to Top