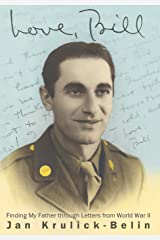 This talk presents the true story of Jan Krulick’s emotional and life-changing pilgrimage of the heart to find and reclaim the father she barely knew. Her father  died in 1960 when she was just six. Her mother rarely spoke about him again, until a year before her own death in 2002, when she gave Jan a box of nearly one hundred love letters he had written between January 1942 and September 1944 while he served in the Army Air Corps in North Africa and Italy. Not reading them until five years later, they revealed a treasure trove of information about her parents’ relationship… and brought back to life the father she thought she’d lost forever.

The letters led Jan on an extraordinary journey following her father’s actual footsteps during the war years. Each letter evokes another time and place, while a series of amazing twists, turns, uncanny coincidences, and the kindness of strangers lead to unexpected discoveries from Morocco to Paris to upstate New York. Along the way, she learns about her parents’ great love story… about the war in North Africa… about the horrific fate of the Jews in Morocco, Germany, and France while connecting with her own Jewish roots. Her book is available on Amazon.com.

This is the second of 3 sessions that you can register for individually.  When you register, you can choose which you prefer: in-person or Zoom.

Thank you for visiting!
Please take a minute to SUBSCRIBE to our monthly NEWSLETTER
Give it a try, you can unsubscribe anytime.
Close
Go to Top